Giving Up on Good: People I Like and Influence I Love

This is part of the art of advocacy series, exploring what it means to influence and be a world changer.

I am just one of those people who actually likes people.

It seems cooler to not like people. We are always told that we should love people (you know, Jesus and all, teaching us to love our neighbors). But, though we want to be a good lover and be the loved-one, that has little to do with liking people.

Isn’t it more trendy to actually say we don’t like people? Maybe we’d expect “I don’t like people” from the lips of a software engineer. But from a social service worker? A pastor? Your doctor?

People don’t like people because people are messy.  I’ve lived life with enough people- the messy side of them (no- not the backside, but seeing their insides)- to not like people either.

But, for some reason I still like them! I have a sadistic desire to understand what makes people tick, which in turn just makes me messy with their mess. Even though I don’t like conflict, I get a roller-coaster rush from the up’s and down’s of relationships. Even if I don’t want to be the actress herself, I like a front row seat to the drama. Then, I confess, I have to force myself not to gossip because it tastes so juicy. And naughty as it is, I love social experiments!

Seriously, though, I think I’m good with people. I love to encourage and challenge them.  I like to listen and figure them out. I like to walk with them in life. And I love to organize, guide, and lead people! But maybe most of all, I love to inspire and influence people towards what is good (In case you didn’t see that in this blog’s tagline).

But sometimes liking people causes problems for me.

I won’t begin on my awkward befriending the door-to-door salesmen experiences, but this situation has been getting under my skin of late:

Recently someone of a specific, um, worldview, keeps visiting my house with a buddy of hers. She is person, and as you know, I like people. Ergo, I kinda like her. What I don’t like is that I have to choose to either reject her or be “friends” with her (in a reading pamphlet kinda way). I’m not really annoyed by her religion being pushed on me; that type of thing doesn’t usually bothers me. What bugs me the most is that I already don’t have time to be friends with everyone I want to be friends with, let alone a new person at my door I feel forced to be friends with!

You know, I can’t tell you how many times I’ve tried being friends with everyone. But every time I try, it still doesn’t work! You see, the problem with liking people is that there is not enough time in the world to be there for all of them.

In fact, almost two months ago I started getting so stressed out by feeling like I had to be there for everyone (which, by the way, was something never expected of me) I had too many people to respond to and I began to shut down. I knew would I would have to give some people up- that I even knew I was on my way to overload in advance was a major step of growth for me! But when the time finally arrived, I just couldn’t couldn’t stop liking people.

It really got to me one day when I realized I had new people in my own neighborhood who I could be friend with, but I couldn’t hangout with them because I was too busy trying to meet-up with people for one cup of coffee, where I would initiate a relationship I could never maintain with them.

This realization is what caused me to stop at least one of my roles, the role of being on staff at my church. Well, this realization combined with my boss finally forcing me to quit after a couple “help me, I am too overwhelmed, I need to stop” conversations.

But I hated quitting. And I still do, although I am not stressed anymore.

Why? Because I like people. But no matter what, I can’t inspire the whole world. I just can’t be there for everyone.

Jesus, the ultimate lover of people, figured this out long ago. He had his besties- Peter, James, and John. Then he had the twelve guys he pretty much lived with constantly, his disciples. Then there was a much bigger group he hung out with, like 72 people or something. I am sure there were quite a few more he knew the names of, chilling out with here and there. And then there were the thousands he taught, although he didn’t actually spend his time one-on-one with them. Even so, his message started with these guys and went all around the world, influencing billions in the last two thousand years.

I don’t think Jesus thought out this social strategy in advance (though I could be wrong). I think its just naturally right and logical. There is just no way for a person to be able to maintain relationships with everyone. But, Jesus still changed the world even though he wasn’t everyone’s BFF while on earth.

In case you don’t know, I desperately want to change the world. I hope to make it a place that reflects things that Jesus cares about- Justice and Mercy. But, no matter how I try, I am not going to be friends with everyone, and even if I was, I might not influence any of them to change the world with me.

Instead, I am becoming better at realizing this is reality. I am giving up kicking myself when I don’t texting and email and tweet and facebook and meet-up everyone all the time. Yes, I had to give up some circles of influence and realize there are just some people I won’t get to know whom I would like to. But if I didn’t give that up I would have also lost relationships and influence in other areas. The truth is that in this season my influence might mostly just be within my home, my neighborhood, and with a scattering of others in my church and community.

You know, I’m not totally okay with this.

But I believe giving up people- this good thing of liking and loving everyone- is just the right thing for me to do right now.

Have you ever had to give up some influence to be more effective in other ways?

Or what’s a good thing you need to give up to be a better advocate for the poor and oppressed?

This post is linked with the Naptime Diaries’ Thursdays’ Giving Up on Good. 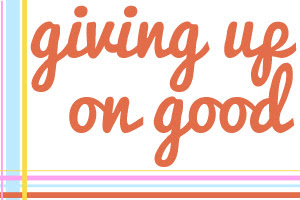 Why Should We Seek Justice? International Justice Mission’s Model

If You Use Your Options, Misery Is Optional