Every year on this designated day (April 25th), we are reminded that malaria still exists. I have had a few friends who have caught malaria overseas, convincing me that it is nothing I’d want to contract. But, horrifyingly, an African child has a bout with malaria an average of 1.6 to 5.4 times a year!

I guess malaria used to be a problem in the States. But when the Center for Disease Control and Prevention was created in 1946, one of its first goals was wiping out Malaria in our country. It took only five years!

“When made a priority, malaria can be stopped.” (World Vision Act:s)

And we should make it a priority; malaria hurts people in areas that we care about:

“. . . in West Africa, very poor families, on average, spend one-third of their income dealing with malaria. That’s equivalent to a U.S. family with an annual income of $50,000 devoting $15,000 each year to one illness.” (Freedom from Hunger)

And do you care about poverty? So do I! Yet, as you can see, malaria is one of the most vivacious perpetrators of extreme poverty around the world.

The End of Malaria

Its not so bad, though! Don’t be depressed. Get excited because malaria is on its way out. Check this stat out:

It helps that the United Nations has made it a goal to eradicate malaria. The goal was to do so by 2015 but we might still be able to do it! Our congress already passed a law, signed by our president, which dedicates $5 billion over five years to wipe out malaria (which, if I am doing the math correctly, is less than 1/15601 or .006% of our yearly budget). Other nations have decided to invest in destroying this killer, as well.

And many average advocates, like you and I, have the chance to help end this disease. We can help by donating to organizations or calling on our government to actually deliver on their promise.  Although it might seem impossible, it is true that we work ourselves out of the job of advocating to remove malaria.

Honestly, I would love to not have to write a blog post on malaria in 2016!

(Ironically, now in 2016 I just updated the 10 Malaria Charities & Organizations page, but this disease is still getting better!)

Buy a net or support an organization! A $10 donation to buy a bed net (which 2-4 people can sleep under) can change a family’s life. As the mosquitoes which carry malaria feed only at night, this is actually very effective, drastically reducing risk of infection.

Donate at one of these 10 Organizations Fighting Malaria (updated in 2016, including what resources/actions various orgs offer. All the other actions on this Malaria 101 page I am not sure are still active as of 2016).

If you want a cool shirt which also donates a bed net, GIVEN has got one for you for $28. Wearing this can create awareness of malaria, giving you a chance to encourage others to do something themselves.

Talk about malaria! I know, it is a great conversation. I am sure my friends are rolling their eyes at me as I keep giving them the Malaria 101 info. But use Facebook, Twitter, whatever you like- just make a plug telling people where you stand (“Let’s end malaria. We can do it and it is a pointless disease to keep around”).

I got free a World Vision Act:s malaria resource kit in the mail the other day and my first thought was “What the heck am I going to do with this? Can I seriously throw an anti-malaria party?!” Maybe I will. But so far, I’ve actually found it easy to give each of my friends a business card with malaria statistics and a postcard which can be sent to our government, encouraging them to follow through on their promise to end malaria.

Spread info in your community! What I learned from Action: Cover the Night to End Slavery (KONY 2012 Pt. 2) is that its really easy to put material places. At least 1/2 of businesses in an average strip mall have a bulletin board or table to put promo material. So, guess where I am putting end malaria material? 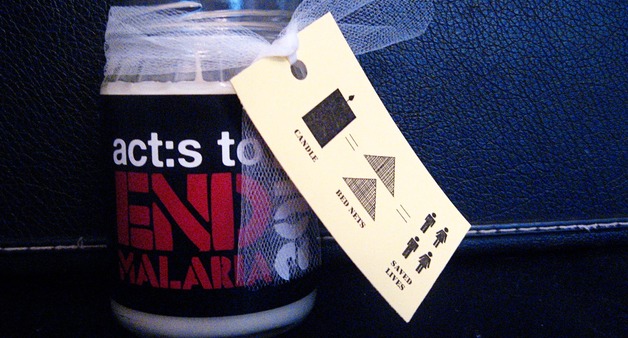 One idea I love is making homemade citronella candles, selling them to raise money for bed-nets. How creatively original! I am not really sure how to do this, but by contacting the person who decided to do this, we can figure that out!

Lastly, and probably most importantly, contact your governmental representatives– we need them to follow through with their commitment to ending malaria! Sometimes it only takes ten willing people to contact their elected officials before they make a move. Don’t be cynical, underestimating the positive power of politics!

Use your voice by clicking here or tell me and I will send you a postcard to fill out!

Here is a great 1 & 1/2 minute video to share with your friends about malaria!

Why Reaching 20 Weeks is a Big Deal! Lupus in Pregnancy Update #5

Making A Difference Through Proximity